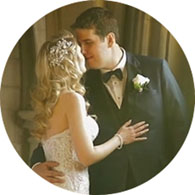 You may have viewed some of our work on our portfolio page but there’s much more we want to share with you... please enjoy this additional collection of wedding films we’ve created for our wonderful wedding couples.
Follow Us
June 1, 2014

We were a bit concerned during the week leading up to Lauren & Jamie’s wedding, due to persistent unsettled rainy weather. Thankfully, Saturday finally arrived and along with it, perfect sunny skies. As Toronto wedding videographers, we’ve filmed weddings all over the GTA, but this was our first time filming at the world class Glen Abbey Golf Club. Lauren and Jamie’s Oakville wedding was beautiful and sweet. The couple met each other for the first time on their wedding day at the scenic Gairloch Gardens, followed by their wedding ceremony and reception at Glen Abbey. We enjoyed capturing many special moments during the day with our wedding videography. One question we are asked frequently is about the axe the couple used to cut their wedding cake. The answer – Jamie is a firefighter, so the miniature fire axe was a fitting choice! Enjoy Lauren and Jamie’s wedding highlights!

Planning an outdoor wedding can be a gamble at anytime of year but the end of October is definitely a risky proposition. In Maggie and Jimmy’s case, the weather came through and as you’ll see in this wedding video, their wedding ceremony went off without a hitch. The beautiful Eagle’s Nest Golf Club just a few minutes north of Toronto was the venue for their day. We wedding videographers love breathtaking wedding decor and we were amazed at the reception room wedding planner extraordinaire Wendy Lee of Asian Fusion Wedding and her team put together! Wedding videography is such a labour of love when a wonderful couple, great weather, majestic venue and stunning decor all come together as it did for this wedding! Enjoy Maggie and Jimmy’s lovely wedding film!

Samara and Ami were married and celebrated their reception at BAYT – Beth Avraham Yoseph of Toronto, an Orthodox Jewish Shul in the Greater Toronto Area. This was the first Orthodox Jewish wedding we’ve had the privilege of filming, and we were in awe of the beauty, joy, grace, and deep sense of family evident throughout the day. There were many highlights for us on this wedding day… the powerful dancing and singing of the men as they spirited Ami to Samara for the lowering of her wedding veil… the excitement in the couple’s eyes as they saw each other for the first time in a week… the processional to their ethereal chuppa … their deafening grand entrance into the reception… and the dancing!!! This reception was far and away the most energetic, joyous, intense and enthusiastic celebration we have ever witnessed!